Our Geomatics team were appointed by the Carillion Kier Joint Venture to survey more than 3000 cross sections of motorway spanning Junctions 13 -15 of the M6.

At the start of the Smart Motorway project JAJV (Jacobs Atkins JV), the design partner, received a basic point cloud survey. Point cloud surveys are often used to generate detailed design of infrastructure and road network projects. However, there are some limitations with point cloud data including accuracy, so it was agreed that a Topographical Survey would be needed to deliver a more accurate design plan. This would capture any missing data from the hard shoulder to the highways boundary.

Being unable to penetrate vegetation, the original point cloud survey often had gaps in data of up to 70m, with significant elevation changes and hidden structures, so it was impossible to create a detailed design of anything beyond the hard shoulder. There were also steps in the original scan data resulting from potential errors in registration leading to a lack of confidence in its use.

In addition, there were also constraints on traffic management; due to the length of the project it was not possible to use Varioguard or close lanes on a regular basis.  Furthermore, much of the survey data required was within live lanes or central reservations therefore making it difficult to capture using a cloud point survey. 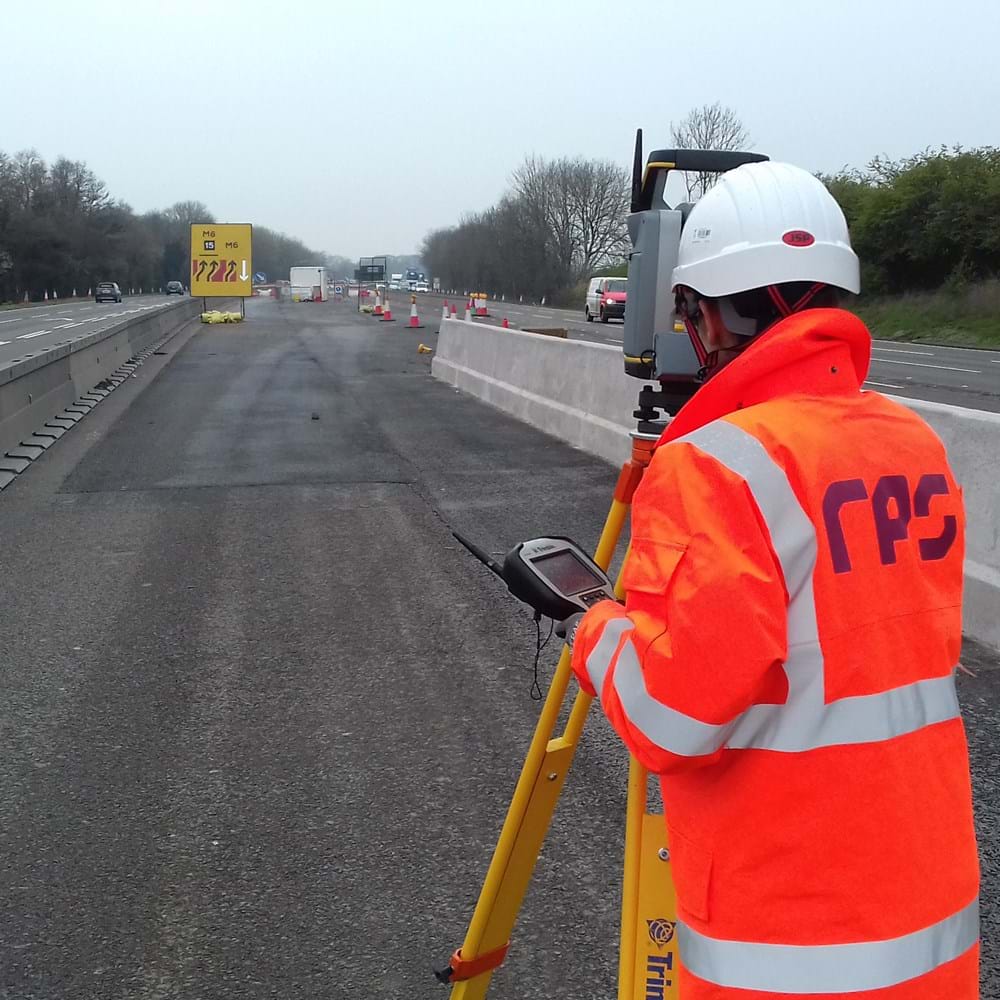 RPS undertook survey cross sections at 20m spacings over 60km - a total of 3000 cross sections. This included all structures and rolling crowns (areas of super elevation for drainage) along the route. As the project progressed, it became apparent that the original survey control used for the driven point cloud survey was not adequate for the tolerances required of the topographical survey, and as a result, a new control network had to be established as part of the works.

To deliver this survey we invested in two Trimble SX10 Scanning Total Stations. This equipment allowed the capture of both high accuracy measurements critical for traditional surveying and 3D scanning for rich point cloud data. The Trimble SX10 was used to capture scanned data within the live motorway lanes to identify and accurately survey the positions of rolling crowns. This allowed the scans to be tied into the pre-established survey control with more efficiency and accuracy. Following structure surveys using traditional methods, this technology was additionally used for quality assurance.

The level of detail captured by our surveying techniques and industry leading equipment, ensured that any subsequent surveying data required by the designers could be taken from the scans conducted by RPS. This delivered our client with cost and time savings and a more accurate detailed design that they could confidently provide for construction purposes.

Following the delivery of the initial survey data, RPS was asked to maintain a presence during the construction phase of the project with Andrew Preston being appointed Survey Coordinator in charge of supervising all surveying activities including maintaining the survey control network, setting out, monitoring and production of as-built survey data.