What's involved in the work of a Protected Species Observer? Find out from Kevin, who has a degree in Biology and Marine Science from Jackson University, Florida. 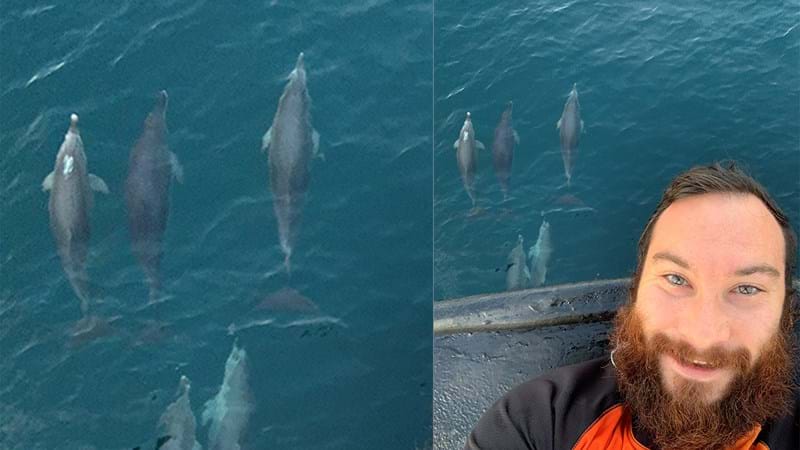 I worked for the Department for Environmental Protection (DEP) for the state of Florida in my first few years out of college. I enjoyed doing the remote side of things: going out in the field, visiting facilities, responding to environmental impacts, hurricanes and so on.

A buddy of mine who worked for the fisheries in the Northeast was leaving that job and had just discovered being a PSO. Since we had both studied Marine Science at Jackson University, I thought it might be a great thing for us to work together, doing something we studied. The DEP was in my field of study but I remember thinking, where's the outfield work? Where's the working on the beach, and on the ocean, on a boat? So we got together with our training and started as PSOs in the summer of 2019.

I did my BOSIET (Basic Offshore Safety Induction and Emergency Training) in Louisiana with retired firefighters and retired Coast Guard. They were a fun group! There were just three of us in a small class and because we were working alongside such distinguished individuals, we got to be in the pool as much as we wanted, doing all the exercises.

We were able to take our time with them, including underwater helicopter training, which was a really good time. They also showed us a great place to get some crawfish and beers afterwards!

QWhat was your first impression of PSO and PAM (Passive Acoustic Monitoring) work?

My very first impression was nerve-wracking. I was leaving another job and I was kind of surprised that PSO work actually was a job you could do! I was also becoming a contractor at the time and I remember not knowing what that life was going to be like.

The very first day being out in the water, I remember looking over at my friend (we actually got to be together on our first project too) and saying ‘We did it, we finally did it!’ We were so excited to be out there, doing something that we had studied and talked about wanting to do during all our time in college.

A humpback whale
(photo taken by one of our PSO team)

I hit the ground running in this job in the Gulf and then transitioned to the Northeast where I did three projects in my first year. My last job in 2019 was in New Bedford. We were knocking ice off the PAM gear, to deploy it onto a small rocky boat in freezing cold. I really experienced the full spectrum of what was possible with the weather! My first project the following April was meant to be New Bedford again. I was hesitant to go back but this was a different boat and a different time of the year so the weather had calmed down.

During that second time, though, there was a lot of fog at sea. It was just like what you hear in the storybooks; you couldn't see beyond a hundred feet in front of you. We were looking out for other fishing boats and fishing equipment while navigating to the Bay.

We’re in the middle of [taking] grab samples and I step outside and suddenly see a whale’s tail. I thought I was dreaming or just seeing things! It was a humpback whale, not fully mature but still pretty large. It surfaced next to the boat and tilted itself, checking us out. It then dived under again, came up on the other side, checked us out again and then circled us for a little while.

It was such a close encounter but I really wasn’t expecting it, and my camera and my phone were both not charged at the time. Luckily my friend had his camera on him. I remember it so vividly and that's one of my favorite stories to tell.

QWhat do you love most about your job?

It’s really an adventure, getting out there and doing something on the water. Every vessel is different. There are pros and cons to all of them but it's an adventure to work with the team and look out for whales, dolphins, seals and turtles, or listen for them acoustically.

QWhat would you say is the biggest impact you can have in this role, for the planet?

For me, first and foremost is mitigating risks out there. Caring for the marine mammals and sea turtles and everything that we see. It's fun to spot them, but we are basically their voice in that critical situation.

We collect a lot of specific data [a big part of PSO work] that I know has gone to universities and education groups that are collaborating on it. These scholars and even the government for the national fisheries can get an understanding of the population levels for these animals, and then regulate laws or change them to adhere to specific species.

We work with oil and gas companies and renewable energy companies and everyone on that boat does have some interest in this. We'll educate them as much as we can. Some of us know a lot more about sharks, versus others who know whales or seals. So it's also about spreading awareness overall, and little by little that knowledge spreads around.

"Just lean in! Lean forward and it's going to be exciting!"

QWhat advice would you give to someone wanting to be a PSO one day?

Just lean in! Lean forward and it's going to be exciting. It's going to be different, but be open-minded about the new atmosphere and the new situation that you're in – enjoy it for what it is. I mean, you literally get to sit on a boat and look for whales and dolphins all day! There’s definitely some work involved, but when you begin to understand the work you're doing, and working with other teams, it's exciting!

Even if you find down the road that it’s not the perfect thing for you, take all the experience that you can. (That's what makes it exciting!)

Ever thought of becoming a PSO?