Amanda, from Florida, is a Team Lead in the RPS team that monitors protected species during offshore development. Find out why she loves her job, the best and hardest things about it, and about some of her amazing animal sightings.

QHi Amanda. It's great to meet you! So, where are you from?

I was born and raised on the east coast of Florida, and grew up with our family frequently going to the beaches on the Atlantic ocean, the Indian River lagoon, and also to the Gulf of Mexico on the west coast of Florida on vacations. I still live there today and love it.

QWhat did you study, and what subjects were you passionate about?

I went to college at the Florida Institute of Technology where I got my Bachelors of Science degree in marine biology, along with a minor in animal behavior psychology. I have always loved science, and decided on the marine biology track specifically after taking a science elective class on that subject in high school. My teacher was fantastic, and she's the one who recommended the marine biology program at Florida Tech to me.

I heard about it from one of my professors in college. Just before graduation, we had a goodbye lunch for the professors and graduating students, and one of the professors told those of us graduating in marine biology that he’d just received an email about a job opportunity from a previous student. I'd never heard of this kind of work before, but it sounded super interesting and just what I was looking for. I contacted the company, got hired, and went offshore for the first time a few weeks later, after I'd graduated. 15 years later, I’m still working offshore and I still love it.

What will the well-dressed PSO be wearing in cold environments this year? Looks like these cozy orange anti-exposure worksuits are a must!

Amanda says: "This photo was taken when I was working in the Arctic Ocean in 2021. This is one of the few times when it briefly stopped snowing and the sun came out! 😊" 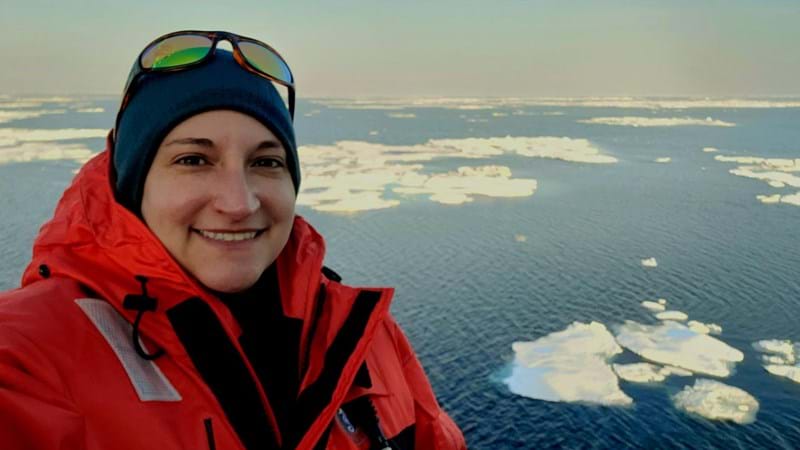 QWhat were your first impressions of PSO/PAM* work?

I luckily had a few classes in college where our labs were out in the field and we got taught how to take field notes and such, which was very helpful when I first started working offshore.

The hardest part initially about being a PSO was getting used to traveling so much and being away from my family for long periods of time. I had never been away from my family for more than a few days before starting this job, and that was mainly for a few school field trips. Even at college, my family lived in the same town, so I still got to see them multiple times a week. Now I love traveling so much and getting to see and work in some amazing locations, and things have improved greatly over the years to allow those working offshore to keep in contact with family and friends at home more easily.

My very first sighting working offshore was a fin whale and I was both beyond excited and overwhelmed. I had seen dolphins and sea turtles before, but I had never seen a whale before. Thankfully my [team] lead was great and allowed me to enjoy the sight of the whale for a minute before reminding me that we also needed to take notes!

*What is PAM work? Find out more here.

QWhat was your training like? For example HUET training?

Well, the first time I did HUET (Helicopter Underwater Escape Training), they didn’t have an actual helicopter simulator yet [which is how HUET training is done now]. Instead they had rigged up this PVC pipe frame that was the “helicopter”. We had five gallon buckets with seatbelts for our “seats”, and we had to pretend to push out windows when we escaped.

Thankfully the training classes improved with my subsequent BOSIET (Basic Offshore Safety Induction and Emergency Training) and FOET (Further Offshore Emergency Training) classes with actual simulators. My least favorite part of the training is escaping from the helicopter simulator after they submerge us underwater and then flip us upside down, but it is definitely better to have practice for that in a simulation setting!

QAnd what's it like working in small teams/spaces offshore?

It’s definitely a big adjustment! But I’ve also found over the years that a lot of the time you meet the best people on the smaller boats we work on. It’s a lot of fun meeting with, interacting with, and making friends with new team and crew members on all of the vessels that I’ve worked on over the years! When people get along really well, rotations can be a lot of fun with game and movie nights. However, sometimes there are personality clashes, and being understanding of the other person and willing to compromise where possible is key to still having a good trip in those instances.

If you'd like to apply, you can find our contact details and more about the role here.

The coolest sighting I’ve had offshore was a mother and cub polar bears on a survey in the Arctic Ocean. We got to watch them for over an hour until they eventually wandered off, and it was an experience that I will never forget.

The funniest sighting I had was while working off New Zealand. We were constantly seeing several species of albatross during the survey, and one day while retrieving an ocean bottom seismometer, the instrument surfaced right in the middle of a small group of juvenile antipodean albatross, and they were definitely surprised to have this object suddenly appear amongst them! We got several funny pictures of the birds being startled and trying to figure out what the OBS was!

I’ve also had the opportunity to see one super-pod of dusky dolphins while working off the coast of Chile. The pod surrounded the vessel, and there were hundreds of dolphins jumping and porpoising everywhere around us as far as the eye could see.

QWhat you love most about your job?

My favorite things about being a PSO are being offshore and traveling to new places. I get to see and experience things that I would never have been able to do otherwise.

In the past 15 years, I’ve worked in the Gulf of Mexico, the Persian Gulf, the north and south Atlantic Oceans, the north and south Pacific Oceans, and the Arctic Ocean. The most interesting places that I’ve been able to explore while traveling for work have been Alaska, New Zealand, the Hawaiian Islands, Greece, and Crete, not only for all of the cool and interesting wildlife that I’ve gotten to see offshore in these places, but also having the opportunity to explore them onshore after the work has been completed!

I also really love being a PAM operator. I’ve had dolphin detections before that have lasted the entire night! My favorite jobs are those where I can be both PSO and PAM.

QWhat do you feel is your biggest impact on our planet?

Helping to protect these endangered species that could be impacted by the work being done on these surveys. I also like being able to add to our general knowledge and understanding of these animals so that, overall, we can better help to protect them while we’re working within their environment.

QWhat’s one small thing people at home can do to help the world’s plants and animals?

Properly dispose of your garbage and recycle as much as possible. We see so much marine debris offshore, and these man-made items can potentially injure or kill the wildlife offshore. The worst are the balloons and broken-off fishing gear, but I’ve also seen hats, shoes, buckets, and tons of plastic bottles.

"I would recommend going out... to practice taking notes and pictures of any wildlife you can. The more experience you have with this, the easier it is to remember to do these important parts of the job"

QDo you have any tips for anyone looking to become a PSO?

If possible, try and get out on a boat before applying for the job to see if you get seasick and, if you do, what, if any, medications will work for you. I’ve seen more than one new PSO never make it beyond their first trip offshore because they got severely seasick even in calm seas.

I would also recommend going out and about near where you live to practice taking notes and pictures of any wildlife you can. The more experience you have with this, the easier it is to remember to do these important parts of the job and let you enjoy the experience of the detection a bit more.

I also highly recommend that you talk to another experienced PSO for tips on what to pack and how to pack (i.e. the best type of bags to bring and such). Sometimes you will end up on really big, fancy vessels and/or have a really easy schedule, but the size and conditions of the vessels we work on can run the gauntlet between fantastic and not so nice, and sometimes the schedules can be hard with very little free time.

QHow would you sum up life as a PSO?

This work can be hard at times, but it can also be a lot of fun and it is highly rewarding!

Thanks, Amanda. It was great to talk to you. Enjoy your next deployment!

If you'd like to know more about the work of our Protected Species Observers, AKA Marine Mammal Observers, including PAM, visit their webpage here.