Cassi Frey is a Protected Species Observer (PSO) and PAM operator* from Florida. She studied zoology at the University of Florida. Growing up going to Camp SeaWorld, Sea Camp, and living near the water, she has always had a deep love of nature and animals. We interviewed her to find out what it's like to work as a PSO and hear some of her amazing stories!

Cassi (left) celebrating her birthday "in the office" 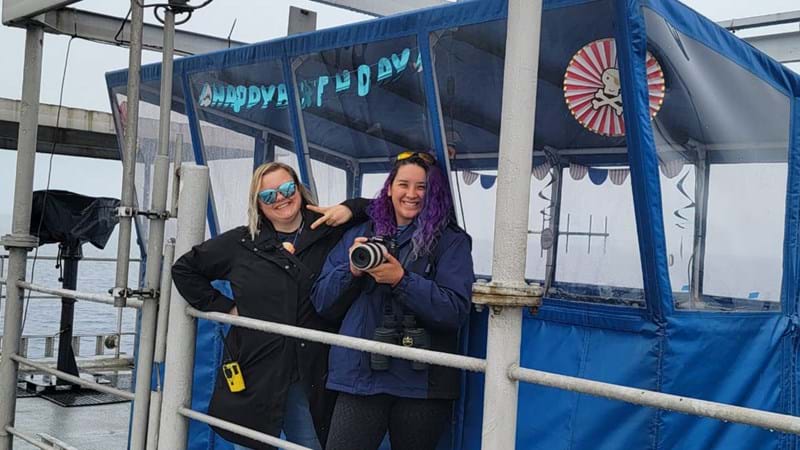 QCassi, what first got you interested in PSO work?

I went to a Sea Turtle Society meeting in Florida, and I met another PSO there. She heard about my background and thought I’d be perfect. (I’d been able to spend two years away from home during the Peace Corps.) I looked into it and it sounded great – going on sea expeditions and being able to protect whales and dolphins and turtles!

QWhat was your training like – for example, the BOSIET (compulsory Basic Offshore Safety Induction and Emergency Training)?

The first time I got my BOSIET, I was the only female in a room full of 30 men. I was so nervous because I had no idea what to expect. We’d just done the PSO training the two days before and then it was, “off you go, go prepare to maybe go down in a helicopter,” which was a little nerve-wracking! We got into the pool and I guess because I was the only girl, they wanted to show the men in the group that if a girl could do it, they could do it. So they made me go first, every single exercise.

It amped up my anxiety, but then, after the first few times, it was like, oh, OK, this is fine. Then it made me feel kind of proud. And it helped me prepare for what to expect in the field – in terms of, just go ahead and be the first one to put your hand up or put your first foot forward!

[RPS Environmental Project Manager Jilian Daniel:] I think that's a good point! Offshore work – across various industries – can be male dominated, but you’ve all gone through the same training. You know you're just as good and just as capable!

QWhat was your first impression of PSO work once you started?

That I was going to be staring at water for a long time! I mean, honestly, the first time we saw animals, I was so excited! It was a resource dolphin, which I later learned was a rare sighting in the Gulf of Mexico. But as my first time as a PSO, I just… you know… you're screaming, you're trying to get all the data. You're trying to remember everything. Luckily, I had a [project] lead that was able to guide me and say, “Don't forget to gather all these certain data points!" [Evidence-gathering is a big part of PSO work.]

I was so excited to be in the animals’ environment, where they live, rather than some sort of marine park, where they're confined. I was out in the world being able to see these animals do what they normally do, which is jump and have fun in the water.

QSpeaking of having a lead to remind you, what's it like working in a smaller team and smaller spaces offshore?

OK, so working offshore in small teams, I actually find that I really thrive. I'm good at creating those connections with other people. Communication and the ability to care about one another offshore is my strength. I love creating a team where we share a culture of kindness. (I wish that I could do that everywhere I go – and I try to!) I love creating a crew that's strong and acts as a team, rather than several individuals.

Are you interested in applying to be a PSO?

If so, you can find our contact details, plus more about the role here.

QWhat’s the craziest or coolest thing you've ever seen offshore – either animal encounter or weather?

One of the craziest items I've seen in the Gulf of Mexico was a full refrigerator floating on by. At first you're like, what is that? Is it a whale logging? And we got out our binoculars and it's just a refrigerator, just chilling there, hanging out. That was pretty weird.

With animals, I’d have to say last summer on an academic research vessel that RPS supports. I’d never seen so many humpback whales at one time. It was so inspiring and amazing to watch these whales jumping out of the water, just willy nilly. I know I'm going to look back and be awestruck that we got to experience that.

QWhat do you love most about your job?

Other than all the animals we get to experience, being part of a science crew and a ship crew. You get to meet people who don't think like you, who don't speak like you, who come from other countries and other areas and then you get to function as this team. You also get to go on expeditions, to explore, which is something not many people get to do, and it's what I really love.

QWhat do you feel is your biggest impact on our planet?

I guess my ability to care, empathize and feel compassion. I feel that it brings a big impact to my environment and people around me.  I can definitely share that passion with newbie PSOs – they’ve had some training but real-world experience is worth so much! I love being able to bring new people on, and then to see what their take is so I can learn from them too.

"Get out there and volunteer. Try everything. The marine biology world doesn’t lack volunteer opportunities!"

QWhat is one small thing that people at home can do to help our planet?

Take care of other people and animals just as you would take care of your own. Extend your empathy not just to your ‘bubble’, but everywhere you go.

If you saw some trash, it might harm something later, so you’d pick it up and throw it away. Or the soda bottle plastic holders that you cut up because it could harm a sea turtle. You're just extending the care that you’d give to your own children or yourself, but to everybody – because we're all out here trying to survive on this world, trying to make a better place.

QDo you have any tips for anybody who'd like to be a PSO?

Get out there and volunteer. Try everything. The marine biology world doesn’t lack volunteer opportunities! I spend a lot of time in the Indian River lagoon off of Florida doing small boat surveys with dolphins, which really jump-started my career trajectory. I knew that I loved it because I could wake up at 5am and be fine!