Active travel and safe streets - the future for transport planning?

Over the past few months, the way in which people live, work and travel has changed in ways not previously considered possible. Melanie A'Lee, Associate Director, looks at what’s changed and the resulting environmental and societal implications and questions what can be maintained and built on to support the UK's journey to Net Zero.

The Government’s response to COVID-19 has significantly impacted the way people move around. With initial instruction to avoid all non-essential travel, we saw an immediate reduction in overall travel demand. However, as the UK lockdown measures have started to relax with normal everyday activities starting to resume, traffic levels are rising again. Figures from the Office for National Statistics show how the pandemic has impacted commuting traffic over recent months but how will these figures change over the months to come?

Figures from the Office for National Statistics

To navigate our way out of lockdown, the Government has set out a programme of key stages to map out steps for when physical distancing and travel restrictions are likely to be lifted. Using the Government’s key stage chart, we have been able to look at the potential effects on travel behaviour to predict changes in traffic flow in steps two and three:

However, by Spring 2021, greater levels of confidence will encourage many people to revert back to established modes of travel and, by Summer/Autumn that year, it is considered that there will be a levelling off in people’s travel mode choices, at which point the new ‘Norm’ will be established, which is likely to be characterised by traffic levels only slightly below historical trends. 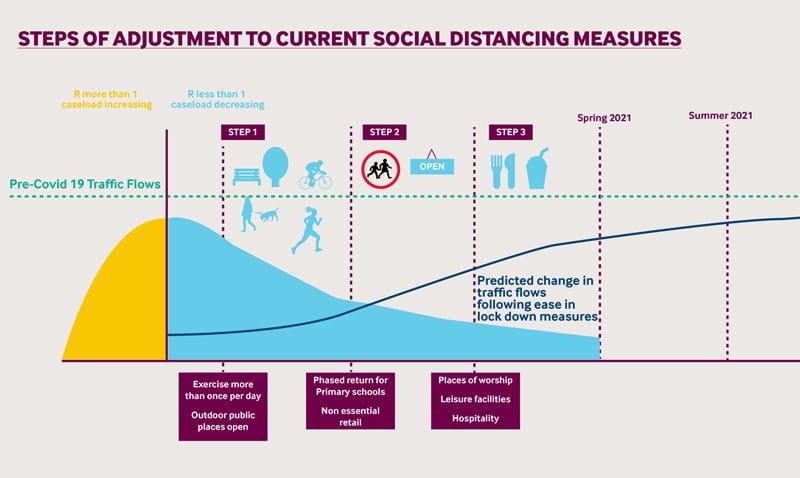 The Government's key stages with our predictions

As we emerge from lockdown, we are presented with an opportunity for greener, more sustainable travel methods to take centre stage and lead the way to cleaner air and healthier communities. A number of transport initiatives and approaches are up and running, ready to help reduce carbon footprints across the UK. These include:

In an attempt to safely accommodate the increased demand for walking and cycling the UK Government established an Emergency Active Travel Fund of £250m on 9 May 2020 to create protected spaces for cycling, wider pavements for pedestrians as well as other forms of improvements.

Early interventions have been seen in: 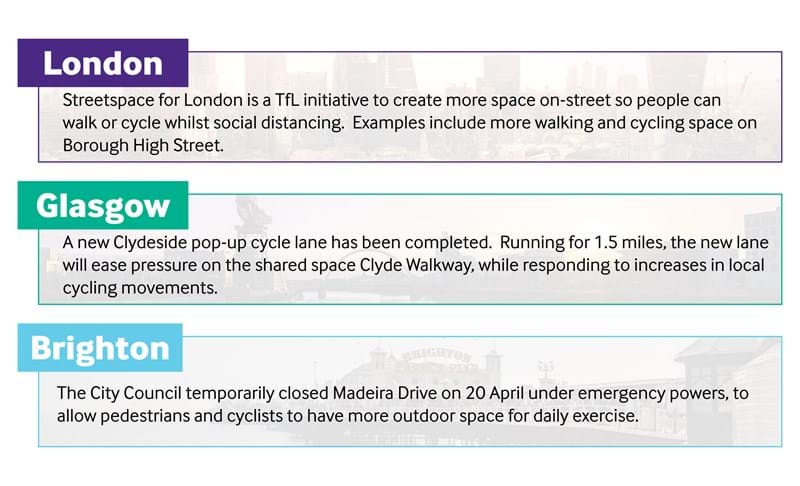 In creating safer environments for the future, the current COVID-19 initiatives are able to adopt many safe streets principles.

At RPS, we believe that our streets are shaped by all of these attributes and where focus should be given to the needs of people, often providing them with equal or more attention than vehicles in terms of physical design and/or priority.

There have been historical attempts to ‘re-claim’ or re-classify our streets with initiatives such as Living Streets, School Streets, Play Streets, and Home Zones.  These are often convenient labels to describe a process where the environment has been re-engineered to provide a temporary or permanent re-allocation of spaces for the benefit of pedestrians and cyclists.

Permanent solutions have often been characterised by relatively simple and cost-effective schemes.  In most cases, these measures have consisted of widening and resurfacing of footways, reducing speed limits, and designating cycle lanes on-street or off-street using white lines or physical segregation alongside improved signage.

There is evidence that some of these measures have also been used to encourage selective priority, such as: 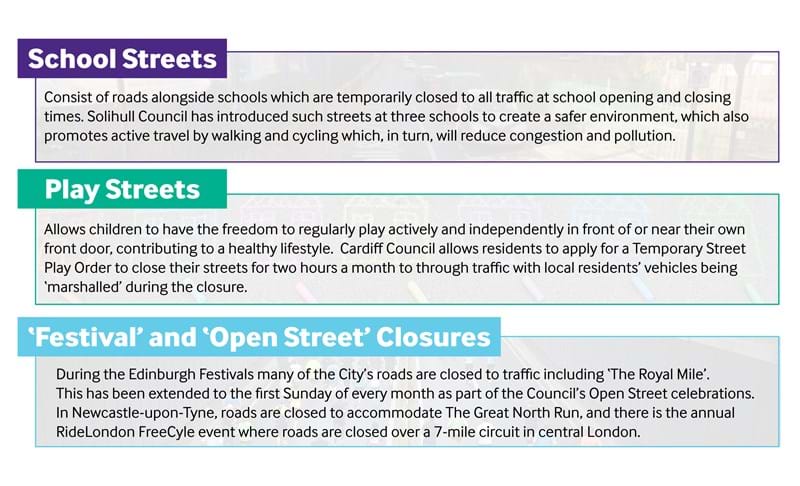 The Department for Transport’s report Investing in Cycling and Walking: The Economic Case for Action (2015) puts the return on cycling investment at between a significant £2.50 to £5.00 per £1.00 invested.  There is limited information of the financial benefits of walking, but there is growing evidence that both modes reduce road and public transport congestion. There are clear economic, social and environmental benefits too, including facilitating inclusivity and improved health and well-being.

In addition to the Governments’ emergency funding, in 2019, the Government-led Cycle City Ambition Programme targeted investment in cycling within eight cities in England between 2013 and 2018.  The initiative cut 440,000 car trips per year and replaced 2,000,000 vehicle kilometres. The scheme was also judged to be attractive to a broader demographic and helped to broaden gender and ethnic minorities participation. The report also highlighted that ‘flagship’ schemes and/or more infrastructure-intensive proposals had a greater effect that more localised improvements.  This suggests that awareness and marketing have an important part to play in people’s choices.

In the current COVID-19 situation, while the prospect of temporary bollards, painted road markings and pop-up cycle lanes may at first seem like a sticky plaster that is too easily over-shadowed by the wider impact of the current crisis, these measures will present people with important visual cues and a different type of perspective from which to re-evaluate their travel needs, both in the short- and longer term.

The challenges, as well as the responses, are therefore perhaps greater than will first appear.  This opportunity has been recognised by the Transport Minister’s statement that it is a "once in a generation opportunity to deliver a lasting transformative change in how we make short journeys in our towns and cities".  The fact that the schemes under the Government’s Emergency Active Travel Fund are broadly classified as (1) permanent, (2) experimental and (3) temporary offers some hope that more legacy schemes will emerge from the mist to deliver longer-lasting benefits.

Scheme identification, appraisal and design are only the starting points to implementation. The key to the permanence of active travel mode schemes will depend on comprehensive monitoring to ensure that the benefits can be measured and translated into meaningful and impactful changes, on the journey to Net Zero Carbon.

US
Please select an RPS location
View all Active travel and safe streets - the future for transport planning? Contacts