The Amazon Fulfilment Centre at Tilbury is a multi-storey unit of 2,000,000 ft2, arranged over four levels.

The development consists of a 22m high multi-storey, single-sided dock distribution warehouse with a footprint of approximately 500,000 ft2. It incorporates two and three storey offices together with a multi-storey car park and external HGV hard standings for 94 vehicles, having required improvements to the local road network to accommodate the flow of traffic into and from the site.

Internal floors extend over three levels from the western elevation to a full height racking zone at the eastern elevation. The upper floors are designated as Robotic Storage Platforms (RSP’s) which accommodate the Amazon Robotics automated storage and retrieval systems, whilst the ground floor houses extensive mechanical handling equipment.

The site in Tilbury was originally marsh and designated as an active flood plain. As a part of the infrastructure works by others, a perimeter flood defence bund was constructed to remove the site from the flood plain as well as lifting the site levels.

The Amazon Robots used in this facility are unique to Amazon and required careful consideration in the design of the structure. The three upper floors in the unit were constructed to tolerances that accepted the robots and so were constructed with concrete floors. The weight of the upper floors and their operational loads, coupled with the clear spans the client wanted to achieve, complicated the principles of the frame stability above that generally found in steel frame design in this sector. 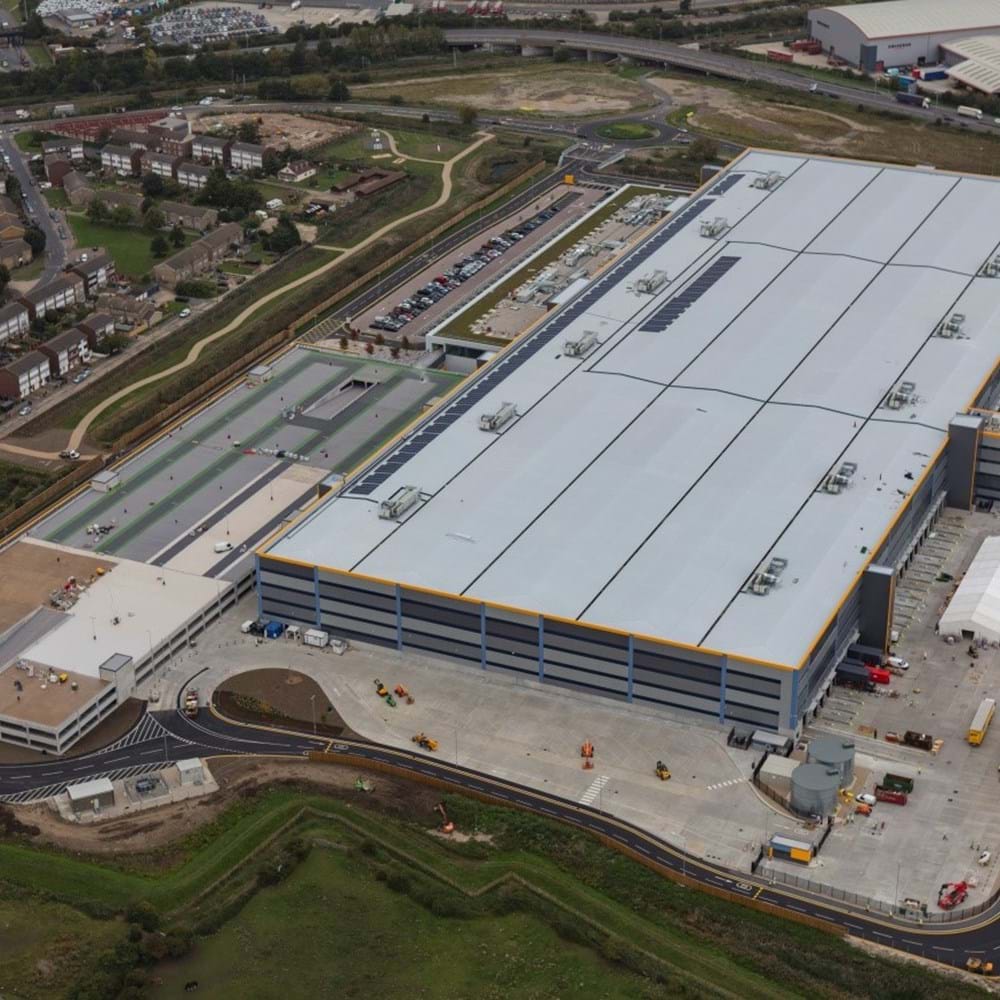 RPS was the consulting civil and structural engineer for the project: which included detailed design of the sub-structures and external elements including drainage. Our engineers worked closely with the whole design team in particular the client and the MHE specialist.

We modelled the building in a 3D BIM environment using Revit and RPS also utilised the BIM models to undertake clash detection, in particular between the significant MHE installations and the building fabric / structure.

We also provided fire engineering services on the project and our input included design review exercises as the design developed, preparation of a detailed fire strategy report including CFD modelling and liaison with the statutory authorities.

The centre was constructed on a plot that had already been prepared and fenced off prior to construction to allow the safety to be managed. Our CDM consultants were involved in the discussions to mitigate the impact of construction traffic on the local area and these arrangements were enshrined in a traffic management plan. The plan was reviewed every three months, or more frequent as local conditions dictated, and improvements or changes implemented on site.

The construction issues that included programme, technical and safety aspects were addressed at a series of design team meetings. There were a number of foundation and energy supply issues that were also addressed during the scheme design with respect to the safety implications. Our CDM consultants were instrumental in providing the framework in which the results of those discussions were captured and stored.