Meet the 100th President of the Institution of Structural Engineers – Prof. Don McQuillan

RPS’ Prof. Don McQuillan has been announced as the 2020 – and 100th – President of the Institution of Structural Engineers (IStructE)1. Specialising in project managing large multi-disciplinary projects and in forensic engineering, Don is a Director in our Belfast office, jointly leading our Structural Engineering team in Northern Ireland.

First elected to the Institution of Structural Engineers Council in 1989, Don has remained involved at the Head Quarters ever since; particularly prominent in shaping the development of the journal -The Structural Engineer - still serving on the editorial advisory group today. He also served as Chairman of the Northern Ireland Region in 1999/2000.

A highly experienced and successful Structural Engineer, he has authored many technical papers, some award winning, and is also an RAE Visiting Professor at Queens University Belfast. He is passionate about mentoring younger engineers, providing technical support and guidance to members and promoting the Institution as the world leader in structural engineering. He is also in demand as an Expert Witness - currently involved in a major case in Hong Kong.

“It is a very special honour to be invited to be our Institution’s 100th President particularly at a time when the rate of change is unprecedented” said Don. “The climate change emergency, in particular, which demands a paradigm shift in mindset and behaviour, means that we will all have to adapt much more rapidly than ever before. The exponential rate of change we are already experiencing could result in the next 30-year period being equivalent to the previous 100 years in terms of its significance”.

Ahead of his Inaugural Address on 16th January 2020, Don shares a bit about his career so far as well as what’s on his agenda for his time as President.

I joined Kirk McClure and Morton (KMM) when I graduated in mid-1975, becoming a partner in 1989, and saw the firm grow from 30+ staff to approx. 180 when RPS acquired us in October 2004. So, I have been with the same company in essence, under its different guises, for more than 44 years. Although dually qualified I have spent most of career in Structural Engineering with brief excursions into civil and marine work as occasion demanded. I have been fortunate to have designed and delivered almost the full range of building structures, culminating in the £270m Acute Hospital at Enniskillen, and also bridges and the restoration of historic structures.

2. What is your proudest achievement as a structural engineer?

It has to be the Waterfront Hall in Belfast, a 2,250 seater multi-configuration concert venue, which opened in 1997. The average age of my project team on completion was just under 30 years and yet we produced innovative solutions to what was a very complex and challenging design brief.

The year of opening it won an Institution of Structural Engineers Structural Awards Special Commendation, as well as the outright Concrete Society Award. The following year the project went on to win the international FIP (Féderation Internationale de la Précontrainte) Award for Outstanding Structures in its category. I received the prestigious award in Amsterdam from the famous French bridge engineer, Michel Virlogeux, and it remains a highlight of my career to this day.

3. What is top of your agenda for your role as President?

Two key areas for the Institution - which as President I will keep the focus on – are professional competence and the climate change emergency.

The Grenfell fire tragedy is likely to lead to a requirement for a higher level of demonstrable competence which, in turn, will require more relevant and specific Continuing Professional Development (CPD).

Climate breakdown and biodiversity loss are crucially important issues for everyone on Planet Earth.  The buildings which we, structural engineers, design and construct currently account for some 40% of the total energy-related carbon (CO2) emissions. The structure of a typical tall building accounts for some 70% of the total embodied CO2. We therefore face a formidable challenge to drastically reduce our carbon footprint and the Institution is leading the way in terms of guiding its members and the wider built environment.

4. As only the second president from Northern Ireland, what do you hope this means for the country’s presence on the global stage?

Becoming the Institution’s 100th President is really rather special! Not only is it a great honour for me personally and for RPS but I consider it to be richly deserved recognition for Northern Ireland and the work our structural engineers deliver across the world. The Institution is proactively striving to be truly global in its reach and impact and hopefully this puts Northern Ireland in the spotlight for all the right reasons. 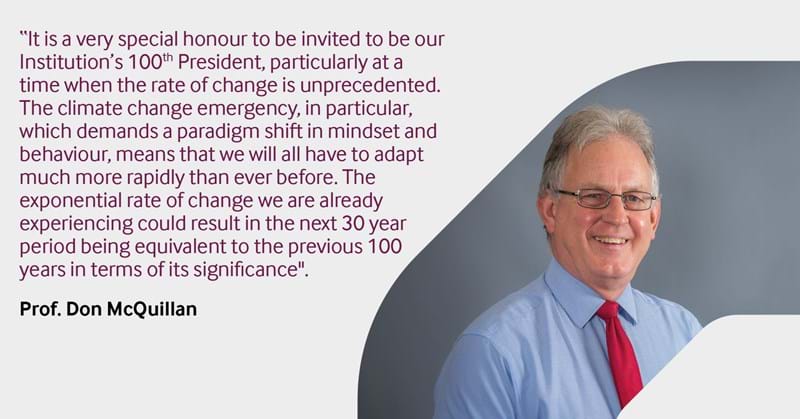 1 IStructE has over 31,000 members in over 100 countries around the world and is the only qualifying body globally concerned solely with the theory and practice of structural engineering.