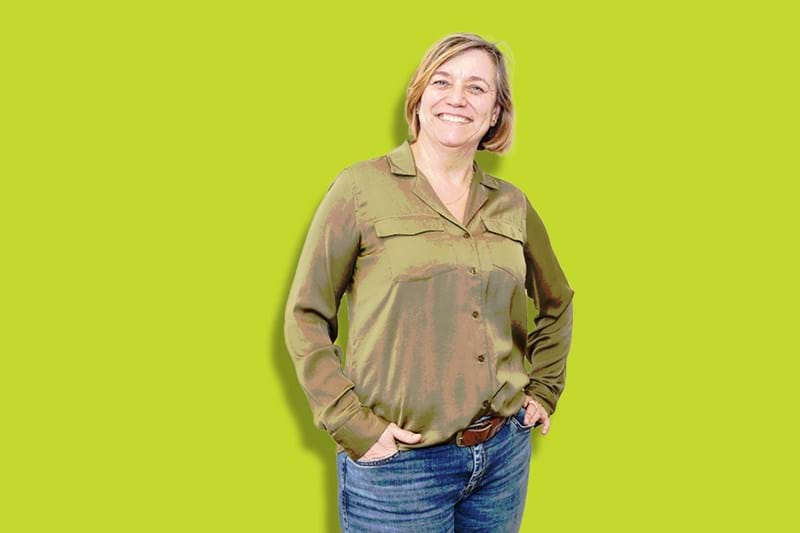 QWhat do you do?

I work as an Operational Manager in our Dutch laboratories. I’m responsible for the operational aspect of our asbestos, chemical, microbiology and geophysical laboratories.

Which woman or women inspire you?

People with a high regard for social aspects and fair treatment are very much appreciated by me. The gender of a person is less important.

In primary school, I wanted to be a teacher. That changed when I went to secondary school. For a while, I thought that anatomical pathology might be something for me. At the end of my pre-university education, I opted for the higher laboratory education programme and completed it successfully. Research turned out to be an important aspect for me. After that, I did study to become a chemistry teacher, but a class of unmotivated teenagers during an internship did not motivate me. The knowledge I gained about the social aspects, how to motivate people and how to bring them to a higher level within their own abilities, is something I have taken with me into my career. Consciously and unconsciously, I still apply this on a daily basis.

Outside of work, what are you most proud of?

To be where I am now. After a career of over 30 years, I can look back on achieving a good balance between work and private life. I still have contact with (former) colleagues and hear from them that they found a source of inspiration in me that they still think about regularly. But I also hear from my private life that I am appreciated as a person. Proud to see that our two children (young adults) are stable in life, but still regularly ask for advice on decisions that are important to them.

After following a laboratory education, I worked for 4 years at Delft University of Technology within various PhD research projects. During this time, I carried out both experiments and laboratory analyses. Subsequently, I started working as a manager in an environmental laboratory. After a merger, I made the step to a commercial position within this laboratory as account/sales manager. A very instructive and satisfying period. Then I noticed a vacancy at RPS as team leader in the chemistry (health and safety) lab. The researcher in me reared his head again. RPS was already a familiar name to me, as samples went back and forth between my then employer and RPS. The switch to RPS was quickly made. In 2018, I started as team leader of the chemical (health and safety) lab and in 2021 I was asked to manage the labs as operations manager.

QWhy is this kind of work important? And what does it mean to you personally?

We do work in the context of exposure research on hazardous substances. Everyone has people in their environment who suffer from cancer or have died from it. Being able to contribute to the prevention of exposure to carcinogenic substances certainly adds value to the work we do.

I have never regretted any of the steps I have taken in my life. But if I were allowed to choose my career over again, I would probably also have committed myself professionally to organisations involved in health risks. Think of research organisations into cancer or other (as yet uncurable) diseases.

QWhat was the best/most useful thing you did to further your career?

There have been two moments that have made a long-term positive contribution to my career. Teacher training, although I did not become a teacher, taught me how to deal with people. The social aspects of people, really listening; steering people in their own strengths, instead of pulling people in a direction they do not want to go. I have used the skills learned there many times, both in raising our children and in my professional situation.

The second important moment was making the switch to RPS. Looking back now, it seemed that for a long time I had lost satisfaction in my work. I dare say that I have now become an (even more) enjoyable partner and mother. The balance between work and private life is now good. Despite working longer hours, I now have more time for myself. Sometimes something comes your way at exactly the right time.

In recent decades, it has become increasingly common for women to be able to follow the same studies as men. Some 60 years ago, it was not common for women to study after secondary school. A selection of professions was possible (nursing, teaching) where women were allowed to continue working after having children. In other professions it was assumed that women stopped working as soon as they became pregnant. Fortunately, this is no longer the norm and there is the same possibility for both men and women to take parental leave.

In the laboratory world a difference between men and women can still be seen, this is also visible within the Dutch laboratories. In the microbiology lab, the percentage of men is always lower, while in the asbestos and geophysics lab the percentage of women is lower. The chemistry lab has always had a reasonably balanced ratio. This is not a preconceived policy; where possible, an even distribution is sought. A healthy mix of men and women tends to be a more pleasant working environment.

In our management team there is a predominance of men. This is not caused by a preference for men; while filling vacancies, we looked for the most suitable candidate from the available pool. In my opinion, this is also the best way of filling vacancies. If you place the right person in the right job, it will hopefully be an added value for the organisation.

The first impression of an applicant should always be based on performance. In our laboratories it would be nice to have an organisation that reflects society with the right people in the right place. But the fact is this is easier said than done due to the decisions men and women make early on in their education.

However in society, the presence of women has become more visible in recent years. More women in politics and more women in leadership positions. Equality between men and women should no longer be a point of discussion. As noted, there are some lines of work where the ratio of men and women is not 50/50. It would be good for these workenvironments to also aim for an equal ratio in men and women.