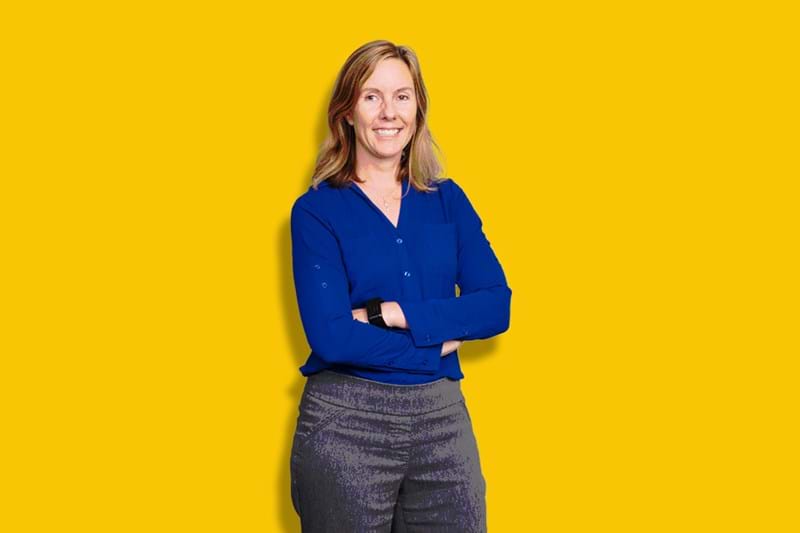 Stephanie joined RPS in 2006 as a PSO after working in the field in Alaska as a National Marine Fisheries Observer for six years. In 2013, she transitioned into an office-based role as a project manager of our marine environmental programs. She now manages that Protected Species department and is the US Team Leader of Offshore Wind.

QWhat are some of your most exciting projects – either past or present?

I can honestly say that there are too many to pick from! But if forced to choose, there are a couple that are especially memorable. Early in my career I was deployed to a project in Peru where passive acoustics were being used for the first time to identify and minimize potential impacts on local marine mammal populations. I lived on a small vessel for several months off the coast and my job was to listen and document humpback whales calling. The data we collected during that project helped scientists to understand that the humpbacks passing through that region stayed much longer and extended much further north than previously thought.

One of my most exciting contributions has been creating field trials for some of the new technologies that biologists can use to detect marine species - infrared camera systems, hydrophone array networks deployed from gliders and autonomous vehicles, satellite systems that let video and acoustic data be streamed from vessels hundreds of miles offshore to biologists who can monitor the feeds from the comfort and safety of their homes. It’s exciting to be a small part of integrating these advanced technologies into marine mammal protection.

If we asked you to choose a woman scientist/ecologist/pioneer people should know more about, who would you pick?

Rachel Carson. She was a powerful nature writer and a marine scientist who wrote about climate change even before the term was coined. She was the rare scientist with a gift for explaining complicated concepts to the average human in a way they could understand and relate to.

What did you want to be when you were growing up?

I have always wanted to be an explorer and used to imagine myself traveling to far off places, observing amazing wildlife and collecting important data that would be used to understand and protect those animals. When I discovered the field of Observer Biologists it opened up a whole field for me that all of sudden looked a lot like my childhood dreams.

What are you most proud of?

I am most proud of two things:

First, the time I have spent volunteering for NGOs dedicated to developing environmentally sustainable practices in developing countries.

And second, the number of young people, including many brilliant young women, that I have been able to assist in entering this unique field of applied sciences. They are such an inspiration.

Climate change is heavily impacting our ocean ecosystems and most species are under threat from many stressors. By addressing some of the threats (interactions with industry operations and impacts from sound generated by human activities, to name a couple) we can help alleviate some of the pressures on some of the vulnerable species. Transitioning our reliance on fossil fuels to development of green energy, like offshore wind, is going to be a key component to addressing climate change and our team supporting this emerging industry in the US in a way that minimizes impacts to marine species.

QWhat has your career path been so far?

My undergraduate degree was in Wildlife Biology where I also focused on resource management – I didn’t know anything at all about the opportunities for careers in offshore applied sciences. It was my first job out of college as a NMFS fisheries observer that opened my eyes to biology field work that felt meaningful, exciting and adventurous. That led me to looking at other offshore biology roles and into Protected Species observing where I eventually realized that I could have a greater impact protecting marine life while supporting responsible industry developments like offshore wind.

QDo you have any advice for someone who wants to pursue a career in your field?

If you’re interested in marine biology as a career but can’t picture yourself teaching or working in a lab, I encourage you to look at opportunities in applied sciences – the ways in which marine biology can be used to support industry activities and development. Consider adding some business courses, or regulatory policy to your science curriculum.

QWhat do you enjoy most about your role?

The most exciting and challenging thing about my job is that no day is the same; I regularly find myself thinking “I can’t believe we are doing this!”. Of course, there is a lot of work that repeats itself, but I also spend a lot of my week doing exciting new things: design testing protocols for cutting edge technology that our clients would like to start using in the field, learning about new industries, like offshore wind, so I can understand the problems the industry faces and look for ways that we can help them.

QThis year’s International Women’s Day theme is ‘Break the bias’, aiming for women’s equality and celebrating inclusivity. However, there are seemingly fewer barriers for women entering consulting, ecology and similar roles. Is this industry getting right?

I am not sure that the larger number of women in life sciences is as much a testament to something that this industry is doing right as an indication that other science fields are doing something wrong- mainly, it appears, discouraging young girls early on in education from continuing in other science fields. Many women scientists cite the presence of institutional discrimination as significant factors in their choice to pursue other career options. But the push to make space for women in all STEM careers by many colleges and companies seems to shifting this imbalance in a positive direction.

QWhich woman or women inspire you?

Professionally, I admire so many women scientists that have clearly found career paths that inspire them, and through that inspiration and incredible hard work, have made big differences to their field.

QWhat do you do in your spare time?

I'm a bit of a strange mix of athlete-nerd. I love to read and watch travel and nature documentaries. I also run, bike, compete in triathlons, and last year, when I moved to the NorthEast of the US, I decided I would take up mountain climbing and summit all 52 of the over 4000 ft peaks in the area! I’m also an avid traveller and have backpacked alone through Australia, South America, South-East Asia and the Middle East.

Want to know more about PSO services for offshore developments? Get in touch!

Find out more
Back to Home
Get in touch