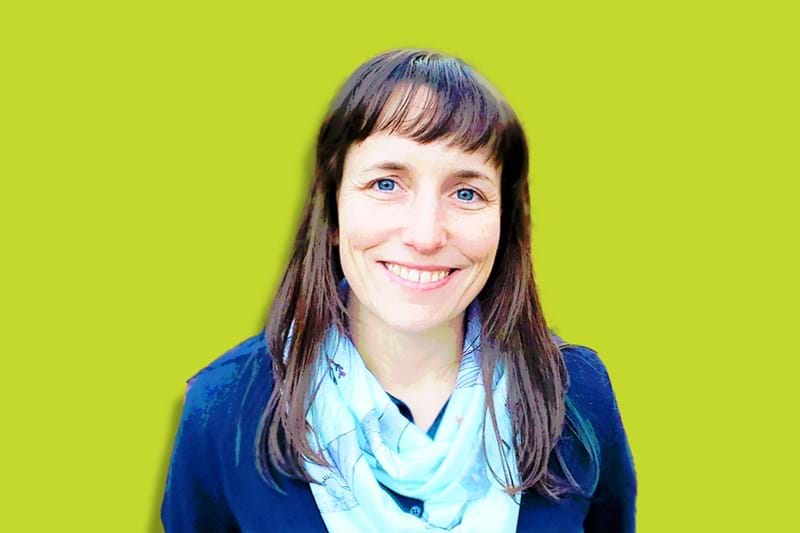 QWhat was your career path?

I was one of those children that always said I was going to be a marine biologist when I grew up, and actually stuck with it! I was reading books about sharks and learning about all sorts of sea life at a young age. I was inspired to keep going down that path.

After I completed my degree in marine and freshwater biology at the University of Guelph in Ontario, Canada, one of my professors mentioned a program in Massachusetts. It was looking for fisheries observers, who work offshore collecting commercial fisheries data for the U.S. government. They’re usually young scientists, fresh out of college, because it's very appealing to those that have just completed four years of having their nose in the books!

Those types of trips range anywhere from a couple of hours to a couple of weeks. I dove straight in after university, enjoying the adventure aspect of it. Over the years, the company I was working for started providing Protected Species Observers as well. I got involved, was promoted to management, and the rest is history.

Which woman/women inspire you?

Sylvia Earle, an American marine biologist, oceanographer, explorer, author, lecturer – a National Geographic explorer-in-residence, the first female chief scientist for the National Oceanic and Atmospheric Administration, and Time Magazine’s first Hero of the Planet. A bit like a female Jacques Cousteau – except that people forget that Sylvia Earle is there too.

Which female scientist should people know more about?

I want to take the opportunity to shout out Dr Bridgette Clarkston, seaweed biodiversity and systematics professor at the University of British Columbia and one of the world experts on seaweed. She was someone I met at a young age, who inspired me that women can be a very active part of the scientific community. She's always been a great support for me – I can always go to her with any questions I may have.

Like a lot of people, I'm attracted to travel, and I've been able to travel to so many great places with this job. I’ve started documenting them in a travel blog, stayingafloatblog.com, which has been a really good creative outlet for me. My favorite part is sharing how you can do things sustainably, and the importance of understanding the environments that you're in.

QWhy is the work you do important, and what does it mean to you personally?

I've always had an interest in the environment, sustainability, conservation, and maintaining an eco-friendly lifestyle, even from a young age – I was in the environmental club at school. I always participated in any of the school’s clean-ups or tree-planting opportunities. It's just always been a passion of mine. To be involved in the newest large-scale industry here in the U.S., [supporting environmental compliance for] building offshore wind farms has been a great way for me to combine my love for the ocean and that green energy, sustainability focus.

I’ve been very fortunate from the beginning. I had a really great university career; I met some excellent professors and did an Arctic study, spending two weeks in the Arctic.

In the summer after graduating, I was able to travel around Canada with the University of New Brunswick as a summer intern. The lab I was working for was focused on the genetics of phycology; we traveled around coastal Canada collecting seaweed samples, which we processed in the lab to try to figure out the genome that made up the different types of seaweed. I feel very fortunate that I had the opportunity to do that. Fisheries observing was also a wonderful experience, which I did for about a year.

As a Protected Species Observer, I've monitored for nesting seabirds during beach renourishment projects and for whales, dolphins, seals and sea turtles coming near offshore construction activities. I've had some pretty great wildlife encounters, like a group of sperm whales hanging out just off the coast of Rhode Island, which is not very common and was pretty exciting for those of us working on that project.

I spent a winter off the Farallon Islands, off the coast of San Francisco, assisting with northern elephant seal research. We had permission to walk among them – something you’re not normally allowed to do – so that was pretty incredible. They can get up to about 2000lb, so they're very intimidating.

QWhat career advice would you give to your younger self?

The most valuable piece of information that I learned has been the importance of networking. I think there can be a combination of ‘who you know’ but also, the timing.

I was always pretty shy growing up, but it took one of my more outspoken friends dragging me into certain situations that I now thank her for. It’s about learning to talk to anyone that's around you. Even if you don't think you have anything in common, there's a high likelihood that you actually might, especially when you're visiting offices and universities and attending conferences. For those that are a little more on the shy side, that's definitely a valuable piece of information. It can be hard to break out of your shell, but it's worth it.

QIs there anything that you wish you'd known about the workplace or your industry?

There's a romantic view about environmentalists or biologists being in the field all the time. However, it’s worth recognizing that a lot of the jobs still have a certain level of data processing, sitting in front of the computer screen – the less ‘glorified’ parts of any job.

Something like job shadowing is a valuable idea. If you shadow someone and find that it’s not exactly what you wanted to do, at least you have an appreciation for their role and how the rest of the team works. It gives you a chance to see the big picture.

QThe theme of this year’s International Women's Day is “Break the bias”. We see many women in ecology and consulting. Why is this? Is there something this field is getting right?

I think that, in general, the consulting and ecology environment is a more open-minded industry. That helps a lot when it comes to having a higher percentage of women choosing those careers. Our field staff is predominantly women and our management team has been too.

I think that when you find an area where there are women higher up in the management roles, you're also more likely to see that ‘women supporting women’ mentality, which can go a long way.